The prevalent practice has been of completely segregating these children; at the most they are integrated (where children with disabilities are placed in the mainstream system, often in special classes). In India, a number of laws and policies regarding inclusion have been formulated however, the comprehension and subsequent implementation of the laws are lacking. At Fourth Wave Foundation, Nanagu Shaale which literally translates into ‘School for ME too’ strives to bring all students to learn together by:

Nanagu Shaale: School for Me too..

The right to education is universal and must extend to all children, youth, and adults with disabilities as enshrined in the Convention on the Rights of the Child (1989). Aside from human rights, inclusion has shown to have several strong social and educational benefits. The National Longitudinal Transition Study, the largest study of educational outcomes of 11,000 students with disabilities, showed that when students with disabilities spent more time in a general education classroom they were more likely to score higher on standardized tests of reading and math; have fewer absences from school; experience fewer referrals for disruptive behaviour; and achieve more positive post-school outcomes such as a paying job, not living in segregated housing, and with having a broad and supportive social network. These results were found to be true regardless of students’ disability, severity of disability, gender or socioeconomic status.

Students with disability will be less stigmatized and more socially acceptable in general schools and their cost of education will also be much lower than establishing special schools. Availability of these special schools in distant locations (compared to where a child with disability might be residing) also does not help the cause of educating these children. The advantages are however not one-sided alone. Educating children with disability reduces welfare costs and current and future dependence; it also frees other household members from caring responsibilities, allowing them to increase employment or other productive activities. Increasing sensitivity to diversity can aid in greater social cohesion and betterment at large.

Nanagu Shaale has been working in four districts (Dharwad, Gadag, Haveri and Semi Urban Bangalore) of Karnataka for the past 3 years with a focus to build a model for scale. It has worked with different stakeholders such as SSA Karnataka, Department of Public Education, Department for the Welfare of the Differently Abled and Senior Citizens, Department of Women & Child Welfare, and the Office of the Disability Commissioner to amend existing programs to be inclusive in nature. ‘Nanagu Shaale’ has increased the enrollment of children with disability in the 4 districts by 12.9% as compared to 1% in the previous 5 years, with a total of 4820 children with disability enrolled into government schools between 2010-2012 (SSA report 2012). 500 of these students are also being tracked to ensure that they are sustained by the system.

Nanagu Shaale has been possible due to the ongoing support from our partner Mphasis, through funding support and continuous guidance from the Corporate Social Responsibility team.

Starting Jan 2014, Phase 2 of the program has expanded into 5 additional districts of Koppal, Raichur, Bijapur, Bagalkote and Kolar.

For more about the project and progress kindly check http://www.nanagushaale.in 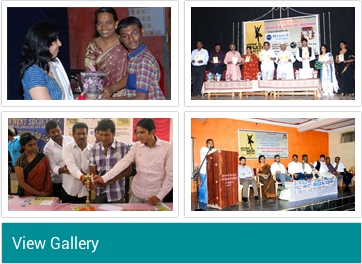